What is Hidden Scar Surgery?

Hidden Scar breast cancer surgery is an advanced approach to removing breast cancer. Breast cancer can be surgically removed with a mastectomy procedure (all of the breast tissue is removed) or a lumpectomy procedure (only part of the breast tissue is removed). With the Hidden Scar approach, the incision is placed in a location that is hard to see, so that the scar is not visible when your incision heals. As a result, you have little to no visible reminder of the surgery or your cancer. 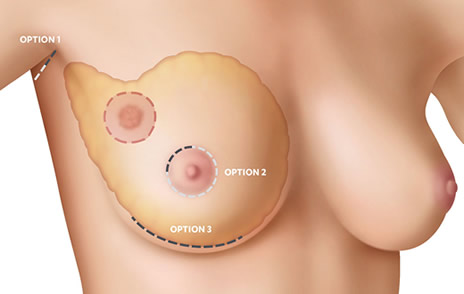 In a lumpectomy procedure, the surgeon will remove the breast cancer tumor and a small portion of healthy tissue surrounding the tumor (margin), but will save the majority of the breast, including the nipple area.

A lumpectomy can be performed as a Hidden Scar procedure. This means that the incision is made in a place that is hard to see. There are three different locations for a lumpectomy incision that make the scar less visible (refer to Figure 1): 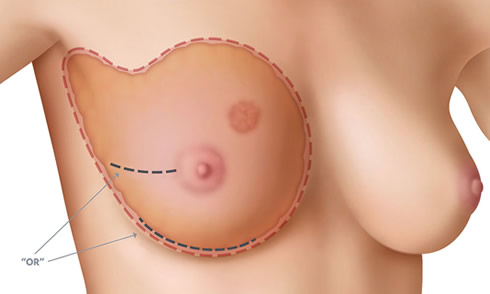 Patients may be considered for a Hidden Scar Nipple Sparing Mastectomy if no cancerous tissue is found in the nipple. Additionally, a Hidden Scar Nipple Sparing Mastectomy is a safe approach that can be used in patients seeking a prophylactic mastectomy (a mastectomy that is performed when cancer does not exist, if the patient has a family history or carries the BRCA gene), in women with DCIS (non-invasive cancer), or small tumors that do not lie directly beneath the nipple.

In a Hidden Scar breast reconstruction procedure, the breast is recreated to have the natural look and feel the patient desires while hiding all the scars. The same incision in the natural crease beneath your breast (inframmary incision) that the surgeon used to perform the Hidden Scar Mastectomy procedure will be used.

The breast can be reconstructed with an implant or with the patient’s own autologous tissue. In autologous reconstruction, the breast is recreated using fat and/or muscle from the patient’s back, abdomen or buttocks. With an implant, tissue expanders may first be used to create room in the breast pocket for the implant. Once there is enough room, a second operation is performed to remove the tissue expander and insert the implant. Some women do not require tissue expanders before receiving a breast implant and will only need one procedure.